The Many Colours of Garnet 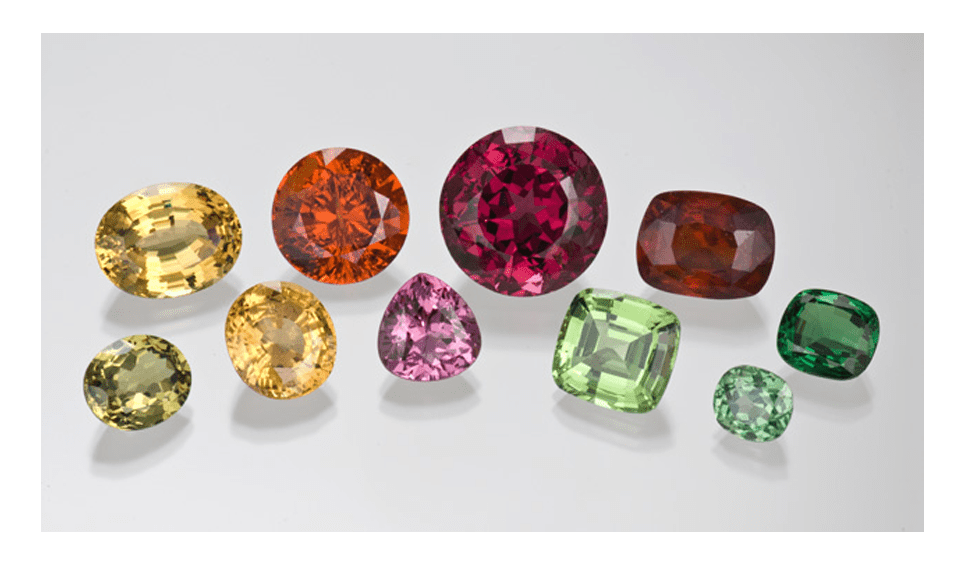 Did you know the garnet does not just come in red? The January birthstone offers an extensive palette ranging from greens to purples, through the more common red tones including orange, pinks and red.

Since the word Garnet comes from the 14th-century Middle English word garnet, meaning dark red, the gemstone carries the connotation of being red. The striking stone comes in a generous range of sparkling colours to suit everyone and anyone. In fact, this mineral displays one of the greatest colour ranges amongst gemstones, coming in every shade of colour excluding blue. The stones give an interesting look, as the colour is altered when viewed through incandescent light, but one solid colour when viewed in natural lighting. As well as being the January birthstone, the garnet is also the gem representing the second anniversary. The garnet can be traced to prehistoric times, where they were highly regarded for their healing properties and prosperity, thought to stop bleeding and protect against poison. Tracing back as far as the Bronze Age and 3000BC Egypt, even once referred to as the stone of the Warrior. Nowadays garnets are mined in the United States, Russia, Kenya, Tanzania, Turkey, China, India, Brazil and Madagascar regions. Structurally, the stone is made up of a group of silicate minerals and each variety possesses similar crystal forms and physical properties.

As a great alternative to the more traditional diamond, this gemstone provides a range of options coming in all colours, shapes and sizes to fit any budget. It can be set into pendants, rings, earrings, bracelets, or any decorative item. Not only is the garnet an attractive looking stone, but it brings special attributes and meaning to the wearer. The stone is said to have special attributes that bring the owner success, turning dreams into reality. The garnet is ideal for individuals, businesses and relationships to attract abundance and prosperity, which is an attribute of the stone that dates back historically. Some of the more familiar varieties include Hessonite, Melanite, Malaya, Andradite and Rhodolite. This gemstone is a reasonably hard gemstone, ranging between 7 and 7.5 on the Mohs scale, making it suitable for all jewellery application.

Below are some examples of some garnet gemstones used within jewellery designs:

This particular garnet is yellow to brownish green in colour and as is sourced from, as the name suggests, Mali in South Africa.

This represents the classic red colour, the pyrope is a popular choice as a more traditional looking garnet.

The Tsavorite has the similar green of an emerald, and can be a great alternative. The gem is mined in Tanzania and Madagascar.

This garnet has the special attribute of changing appearance in daylight from a reddish purple to a blue, green or grey hue.

Each and every garnet comes with background and meaning, and any species of garnet you’re after we can source here at Polished Diamonds New Zealand, and create your own unique custom made item of jewellery. The garnet is a versatile stone, with limitless options making it perfect to fit into a specialty item of jewellery designed specifically to suit.