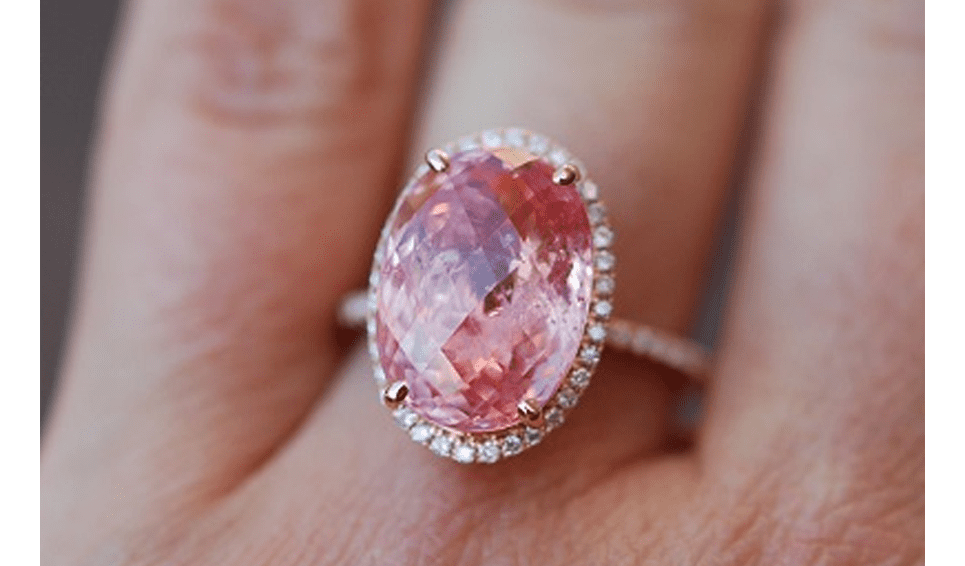 Sapphire is known as one of the hardest existing gemstones, therefore making it the most desirable gem to use for wedding and engagement rings due to it’s durability. Sapphires exist in a range of different colour shades from the classic blue to black, pink, yellow, green, white and the less well known padparadscha.

The name padparadscha originally comes from the Sinhalse word for aquatic lotus blossom. The gem appears as a salmon colour which sits between the shades of orange and pink on the colour spectrum. Padparadscha’s to the public are often not known about however, to gemmologist’s and dealers they are regarded as being extremely valuable and unique. There remains contention between gemmologists on the ‘correct’ shade for the padparadscha sapphire, as the varying shades of pink or orange that the gem may contain causes controversy. It can often be mistaken for the more common pink sapphire however, it is its varying hues and sometimes multiple colour shades that the padparadscha includes that gives them their difference. The unique sapphires also tend to not be evenly coloured, with hints of the yellow sometimes reflecting through. Due to the gemstones light tones, inclusions are easily revealed. However, the rarity of the stone outweighs any inclusions that may be present and consumers may have to sacrifice a higher clarity to obtain a padparadscha with the perfect colour.

The rarity of the gem not only means they often have asymmetric shapes but also that it is virtually impossible to source one over two carats in weight. Padparadscha’s are predominantly sourced from either Sri Lanka, Madagascar and or Tanzania with Madagascar now being the largest supplier of the gem. Padparadscha sapphires can be purchased either heat-treated or un-treated due to the rarity of the stones. Gems sourced from Madagascar are most likely found to be a shade of pink, also including traces of orange. However, when the stone is heat-treated at extremely low temperatures an improvement in the colour may be observed. In comparison, padparadscha’s sourced from the likes of Sri Lanka or Tanzania may have more shades of apricot or orange.

Un-treated sapphires are those that have been developed in the natural environment. The sapphire has not been exposed to any heat, chemicals or treatment processes that are often used to improve the stones colour or clarity. Whilst an un-treated sapphire may seem more valuable, it is through heat treatment processes that the gems colour and clarity can be significantly improved.

During this process, glass and colouring agents can be added to the sapphire to fill any naturally occurring cavities and cracks that may be present. Treated sapphires appear to be the more common choice between the two alternatives. Whilst most sapphires are blue, this rare and stunning sapphire is increasing in popularity. Some clients ask for an apricot sapphire, some ask for a peach sapphire these are also known as the padparadscha.

The peach and apricot shades of the ring make for a perfect engagement ring, giving off warm, rich tones. Pendants, earrings or bracelets can also be an option to incorporate and highlight this stunning sapphire. Should you wish to find out more about the padparadscha or other jewellery options, please contact us and we will be sure to help!