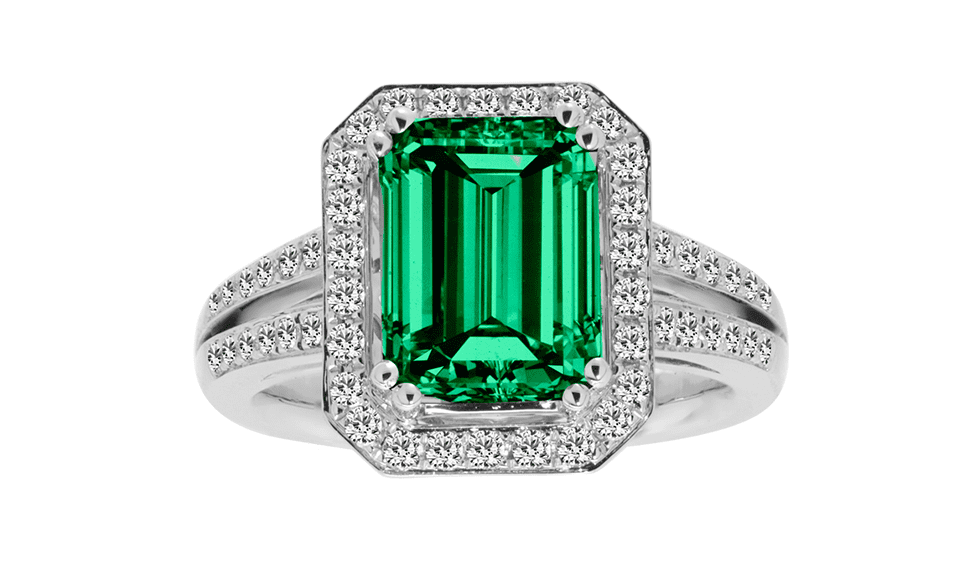 The glorious green colour of Emerald gemstone has made the stone highly prized for many thousands of years. Believed to protect the wearer from misfortune, it has a mystical quality that soothes and promotes tranquillity.

The first known emerald mine was Cleopatra’s Mine in Egypt, supplying the entire world until the incredible emeralds in South America were discovered. The majority of the emerald in the world comes either from Colombia or Africa, and emeralds from each country have quite distinctive appearances.

Fine emerald can be either strong deep green to a lighter, brighter green, depending on personal preference. This gemstone is usually more heavily included than others ones, and it is possible to identify not only which country the emerald comes from by examination of the inclusions, but in some cases which mine in that country! Emerald is the birthstone for May and is used to celebrate the 55th Wedding anniversary.

Quality
As with any gemstone, emerald quality varies from the very high to the very low.  The clarity of emerald is not as important as that for other gemstones, as the stone is traditionally more heavily included than other coloured stones.

Treatment
Oiling of emerald involves the filling in of surface-reaching fractures in the stone with a colourless oil to improve the appearance of those fractures. A high percentage of emeralds are treated in this way so you may always assume the stone has been treated in this manner. Untreated stones that are also bright and clean are highly prized and always cost more than a heated stone of similar appearance.

Folklore
The emerald is traditionally a feminine stone and is associated with the planet Venus and romantic love. The green of the emerald is said to be beneficial to the sight and has been ascribed great healing power. It is also symbolic for the season of Spring and new life. The earliest reference to emeralds in Western literature comes from Aristotle; he was a great fan of the gemstone and wrote that owning an emerald increases the owner’s importance in presence and speech during business, gives victory in trials, helps settle litigation, and comforts and soothes eyesight. The Romans once considered light-coloured Emeralds to be unripe and believed that an Emerald becomes a darker shade of green as it matures. Emerald is the traditional birthstone for May and celebrates the 55th anniversary.

Care
Jewellery made with emeralds, particularly rings, must be treated with care. Emerald jewellery should never be cleaned in an ultrasonic, as the combination of heat and vibration is very dangerous to the structure of the stone. Emerald is a relatively soft and brittle gem and requires considerable care when being worn and during cleaning. Exposure to heat may cause the oil used to treat emerald to soften and run out of the stone; whenever possible, emerald should be removed from the setting before any work is done. An emerald may shatter if dropped or hit, and is susceptible to thermal shock and should never be subjected to heat or extreme cold.